The Most Urgent Task

Today, every ordinary person possesses the five mental hindrances to a great extent. Due to their power, many people break rules of discipline and universal moral principles, as they did in the past. These are symptoms of modern times. The majority of Buddhists, though believers who acknowledge the importance of insight, still maintain the hindrances in their hearts. Even most Dhamma teachers, though they teach the true Dhamma regarding life’s three characteristics, cannot eradicate these five hindrances completely. Defilements still arise in their hearts, so they lack insight into impermanence, unsatisfactoriness, and not-self. The only way to overcome these moral failures and inherent weaknesses, is to practise concentration (samatha) according to the teaching of the Buddha. With this mental discipline, the wavering mind and distracting thoughts are inhibited. Then the mind can be turned towards insight practice, which reveals the universal characteristics of impermanence, unsatisfactoriness, and not-self.

The troublesome mental hindrances should be suppressed by means of kasiṇa meditation, contemplation on the foulness of the body, or some other meditation. This moral effort to suppress evil thoughts is called concentration or tranquillity (samatha). Tranquillity of mind fixed on a single object is the goal at this stage of mental development. The next stage aims to penetrate the true nature of the five groups of existence, or the mind and body. This wisdom can see the impermanent, unsatisfactory, and insubstantial nature of existence with insight.

These two features, concentration and wisdom, exist while the Buddha’s dispensation lasts. This practice and its goal help all devotees to get rid of personality view — the persistent belief in a soul, the dogma of self-view, self-centredness, base egoism. All ordinary persons, since they still believe in a soul or self, are under the influence of ignorance and craving. By destroying this wrong-view of a permanent self, one also destroys, in due course, all ignorance and craving. As long as self-view remains in the heart, one cannot completely escape from the stigma of being shameless and immoral. Though one attains morality, one can maintain it only for a short duration due to self-view. One fails to attain stable, natural morality due to this wrong-view. This failure to attain natural and stable morality is to be feared. Those who, without right view, attain morality and goodness, will certainly kill an Arahant in future lives, or commit the gravest evils such as killing their mother or father. Moreover, due to self-view they will change their faith in various ways, accepting eternalistic or nihilistic views. The universal ways of most ordinary persons are like this. They cannot safely say that they will always refrain from killing. Their mental processes remain wide open to various types of good and evil kamma. Both tendencies exist in every ordinary person who is not a Noble One, and has not realised the Four Noble Truths.

Therefore the most urgent task for everyone is to strive for the final liberation from shamelessness and immorality, to attain stable and natural morality. Starting from this present life during the Buddha’s dispensation one must arouse the unarisen wholesome deeds of concentration and insight with fresh, vigorous moral effort.

This section explains the nature and case of unarisen wholesome deeds. Here ends the ways to practice the four great moral efforts (sammappadhāna).

If one wishes to blame or to criticise shameless or immoral monks in impersonal terms, one must speak within the meaning of the four great moral efforts. The correct way to blame a bad monk is as follows:

When one sees or hears about a shameless or immoral monk, one must see beyond the personal features to unwholesome states in the ultimate sense such as greed, anger, or delusion. Due to the appearance of shamelessness and immorality such unwholesome states are seen or heard about. If one considers carefully, blame should be put only on these unwholesome states, as shown in the Commentary. The correct method of blaming is to blame shamelessness and immorality only in general terms. Attacks must be made on the existence of the root cause of evil, not on the persons who commit evil. 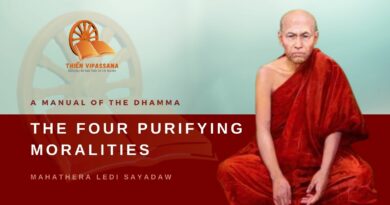