What Are the Effects of Transgressing Morality?

Regarding guilt in the matter of defeat, he commits the gravest offence in this dispensation. As long as he remains in robes he is classified as an immoral monk. If he renounces a monk’s status, he becomes pure even if he does not immediately reach the status of a layman, a novice, or a hermit. However, since he remains as an immoral monk in the Saṅgha, serious faults and guilt arise as mentioned in the Aggikkhandhopama Sutta, Ādittapariyāya Sutta, Piṇḍola Sutta, and others. The Visuddhimagga also explains the gravity of immorality in detail. Day-by-day he gathers serious misdeeds. This immoral status produces grave evils.

We can cite plenty of examples of the bad results for immoral monks. Some immoral monks during the time of Kassapa Buddha, who died without renunciation of monk status, were reborn as hungry ghosts in the Gijjakūṭa mountain. They suffered until the time of Gotama Buddha. The Nidānavagga Saṃyutta of the Vinaya (under the fourth Pārājika), mentions their pitiable plight. It is also mentioned in the Vibhaṅga. Teachers will explain these texts in detail.

Regarding the remaining six classes of offences, those who do not undergo the required purification become shameless, and offend against the Buddha’s discipline, thus getting a further serious fault. If broken, the Vinaya rules create a danger called “paññattikkama antarā,” a danger obtained from breaking the Buddha’s command. So immoral monks can attain neither jhāna, nor the path and its fruition. Moreover, when they die, they suffer in hell. Shameless monks suffer likewise. We will cite an example here as support for this statement.

In the Dhammapada Commentary, a monk suffered for his misdeeds and was reborn as Erakapatta nāga. Even breaking minor precepts without knowledge, if they are guilty according to the worldly rules and regulations, creates bad results. See the cases of the ogres Sūciloma and Kharaloma. They broke the ordinary precepts of the world and were reborn as spirits or ogres. As for the good results for the observance of morality, the Visuddhimagga has mentioned them in detail. Moreover, Visuddhārāma Mahāthera mentions the respective good and bad results clearly in the Paramatthasarūpabhedāni. The good or bad results of observing or breaking the remaining three moralities can be found in that book.

In the Jātaka Commentary (ekanipāta) one who breaks the morality of reflection on the use of requisites suffers in the lower realms. One monk was reborn as a louse due to attachment to his robes. The Vinaya experts and ancient teachers say that attachment to allowable things lawfully acquired does not amount to full commission of evil leading to hell (akusala-kamma­pathā). So here the bad results the monk suffered are due to attachment, and other serious Vinaya guilt. 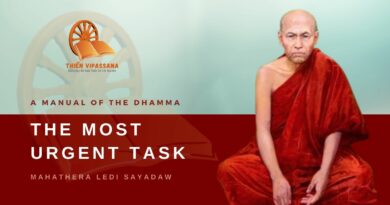